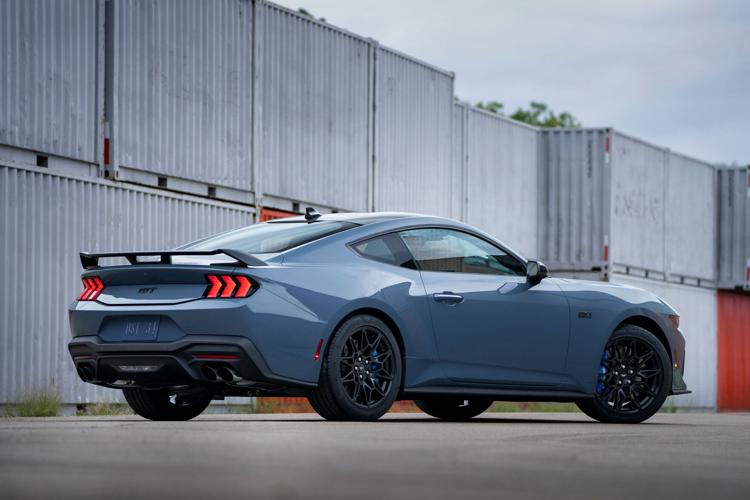 The new Mustang boasts better aerodynamics than the outgoing model. 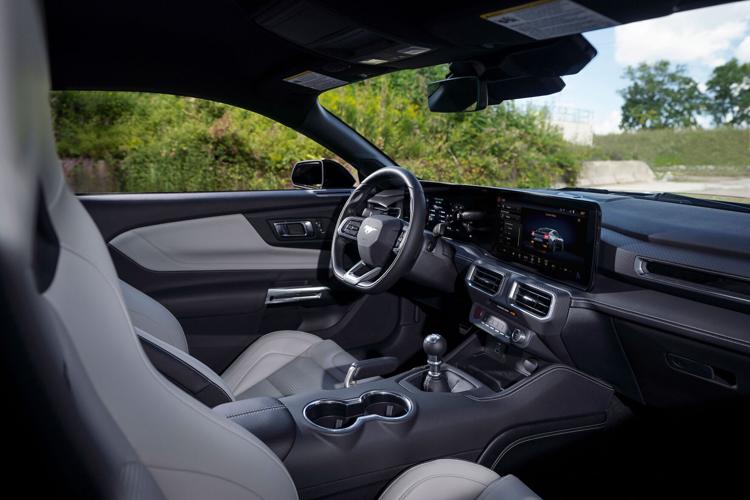 The interior includes a single screen that includes both the gauges and the center touchscreen. 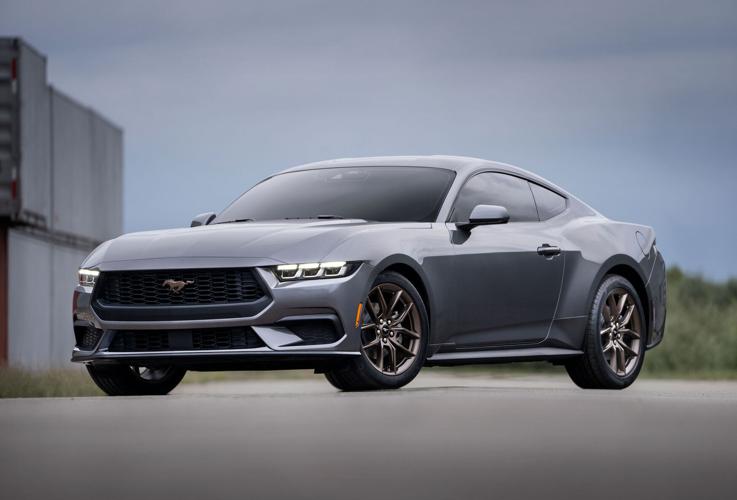 The new Ford Mustang has the familiar shape but with a more chiseled-looking exterior design.

The new Mustang boasts better aerodynamics than the outgoing model.

The interior includes a single screen that includes both the gauges and the center touchscreen.

The new Ford Mustang has the familiar shape but with a more chiseled-looking exterior design.

Ford unveiled an all-new version of the two-door Mustang coupe at an event in Detroit Wednesday night. It has a new body design and new engine options, but the one thing it won't have is electric motors. The new Mustang will be offered only with pure gasoline power, at least for now. Buyers will just have to choose how much gasoline they want to burn to make how much power.

The new Mustang will be offered with a big 5.0-liter V8 engine or a 2.3-liter turbocharged four-cylinder engine just as in today's Mustang. These engines have been improved for the 2024 model year Mustang, though, to produce more power and, in the case of the four-cylinder engine, to burn less fuel. Ford has not yet announced how much more power, but promised that the V8 will be the most powerful "naturally aspirated" — meaning not turbocharged or supercharged — V8 ever offered in a base model Mustang GT.

"Investing in another generation of Mustang is a big statement at a time when many of our competitors are exiting the business of internal combustion vehicles," Ford CEO Jim Farley said in a statement.

Ford had announced plans to make a hybrid version of the Mustang, back in 2017. Since then, though, Ford has introduced fully electric cars, like the Ford Mustang Mach-E SUV and the Ford F-150 Lightning pickup, as well as plug-in hybrids. That means a hybrid Mustang coupe wasn't needed in order for Ford to meet its emissions reduction targets, Ford spokesman Mike Levine said.

So, while its competitors are dropping gas-powered performance coupes like the Dodge Challenger, the fuel-burning Mustang will continue, said Kumar Galhotra, who leads Ford Blue, the division focused on internal combustion vehicles.

"We've made this investment because we see, in the foreseeable future, that there will be a marketplace for internal combustion Mustangs," he said.

Ford competitor General Motors has set 2035 as the deadline for when its lineup will be completely all-electric, but Ford has not made a similar commitment in the United States.

While the 2024 Mustang coupe has an all new body, it is clearly reminiscent of past models. The headlights look narrower and, in this new version, have three light bars in a line, forming virtual eyebrows. The trunk area is also shorter, and the area housing the taillights is deeply indented, giving the lights a natural V shape. The grille is considerably larger on V8-powered cars than on 4-cylinder models. The V8 powered Mustang GT cars also have a large "heat extractor" vent in the hood that, besides releasing air that comes through the radiator, reduces aerodynamic drag.

While the exterior of the car hews close to traditional Mustang design, the inside is radically different. A single large screen replaces traditional gauges, while also acting as a center touchscreen. The half of the screen that's not directly in front of the driver is angled in toward the driver. The richly detailed gauges and graphics on the screen are highly customizable, as are most of the interior lights in the car.

For those seeking to recapture the Mustangs of their youth, Ford is appealing to Gen X and Millienials, apparently moving on from the Baby Boomers who first bought the original pony car. There's even a Fox Body Gauge option that shows dials like those on 1980s Mustangs.

The Mustang will be available with modern driver assistance features, such as active cruise control that can maintain a distance from cars ahead even in stop-and-go traffic, lane keeping assistance, and emergency braking. It will not, however, be offered with Blue Cruise, Ford's hands-free highway driving feature. It was felt that Mustang customers, who are buying a car focused on driving enjoyment, wouldn't be interested in taking their hands off the wheel, said Levine.

For better or worse, depending on whom you ask, owners of the new Mustang will be able to indulge in a favorite pastime — revving the engine while the car is stopped — without having to sit in the driver's seat. Owners will be able to crank the engine up to high speeds using just a button on the key fob remote control. With each press, the engine will rev up and back down several times. This serves absolutely no practical function and is strictly an entertainment feature.

Ford also unveiled a new higher-performance version called the Mustang Dark Horse. Along with a 500 horsepower V8 engine, the Mustang Dark Horse will have various suspension improvements, as well as dark tinted headlight covers and other visual cues. It also includes changes made for aerodynamics and cooling, like air ducts for brake cooling and more powerful fans for the radiator. This Mustang will have special badges showing a forward-facing horse's head, but the front will still show a matte-finish version of the usual trotting pony icon.

Ford will also offer special track-use-only Dark Horse S and Dark Horse R versions that will come with safety gear, like a roll cage, needed for track racing but with other unnecessary options and features, including a passenger seat, left off. (A passenger seat can be added as an option in the Mustang Dark Horse S.)

Today, the Mustang remains the last car — as opposed to a truck or SUV — Ford sells in the United States. The new 2024 Mustang, the seventh design generation of the car, will go on sale next summer.

Aide who testified against Trump escorted out of White House