SPARTA, Wis. (WXOW) - A report prepared following an investigation into the conduct of the Sparta Area School District's Superintendent says she "regularly violated" anti-harassment and anti-bullying policies towards members who worked under her in the district.

Over the weekend, the district released the report of the investigation into formal complaints made against Dr. Amy Van Deuren after an open records request by WXOW and other media outlets.

It was prepared by Jill Pedigo Hall of von Briesen and Roper, s.c. for the district regarding the actions of Dr. Van Deuren.

She is currently on leave as superintendent after the complaints were brought forward by two directors that reported to her that she had created a hostile work environment. During the subsequent investigation, the report said other employees corroborated the allegations of the complaints and offered examples where Dr. Van Deuren exhibited similar behaviors.

The report says that everything culminated with an incident on March 25 when the two directors and the Sparta High School prinicipal were meeting to discuss Dr. Van Deuren's actions. While they met, Dr. Van Deuren showed up at the school and wanted to know what was going on. After being told by the prinicipal that she would eventually get answers but not at the moment, she persisted and tried to enter a locked conference room to talk to one of the directors. She was eventually asked to leave the school which she did, only to come back to the prinicipal's office a short time later.

The report said both directors said they "felt threatened and scared for fear of what Van Deuren would do," so they didn't return to their district offices and took the following Monday off "because they did not feel safe entering the office with Van Deuren present."

In the conclusion to the report, it said that in some investigations, there is often differing viewpoints on the conduct outlined in complaints. The report said that wasn't the case here. "Each person interiviewed reported the same inappropriate, volatile and aggressive conduct, the same intimidation and shared fear and lack of trust of the Superintendent. The Director complaintants and several other administrators volunteered to this reporter that they could no longer work with the Superintendent, indicating that if she remained in place, they would leave SASD."

The second part of the report contains a rebuttal from Dr. Van Deuren in which she addresses the complaints and allegations made by the investigation.

She begins by denying the allegations.

"I would like to begin by unequivocally stating that I did not engage in any Harassment, Boundary Invasion, Isolation, or creating a Hostile Work Environment of which I am accused. I did enter one of the complainants’ offices without knocking on several occasions. I did go into meetings of my sudordinates at times. I did use physical gestures when speaking within my own physical space (including pounding a table). I did use profanity in leadership team meetings (as did other team members, although that does not excuse my use of it). These behaviors on my part were due to what I believed was a level of trust and familiarity with the team and a comfort level in speaking to them from the heart and with passion for the District’s mission and responsibilities to staff, students and the community. My behaviors occurred while working through particularly difficult issues and having to move leadership team members through decisions that required them to look beyond their school or department to the good of the District as a whole.

I deeply regret that my behaviors were perceived as nefarious, threatening, or intimidating. To read in this report how my behavior was perceived completely breaks my heart."

She concludes by asking for due process in dealing with the complaints.

In a statement earlier this month from School Board President Anthony Scholze it said that they do plan to hold an evidentiary hearing to determine possible disciplinary consequences for Dr. Van Deuren based on the report. It would also give her due process rights as an employee.

No date for the hearing was immediately available.

The Sparta School Board meets on Tuesday for their regular monthly meeting.

Click below to read a copy of the redacted report. The names of those involved were removed before the report was released to the media. 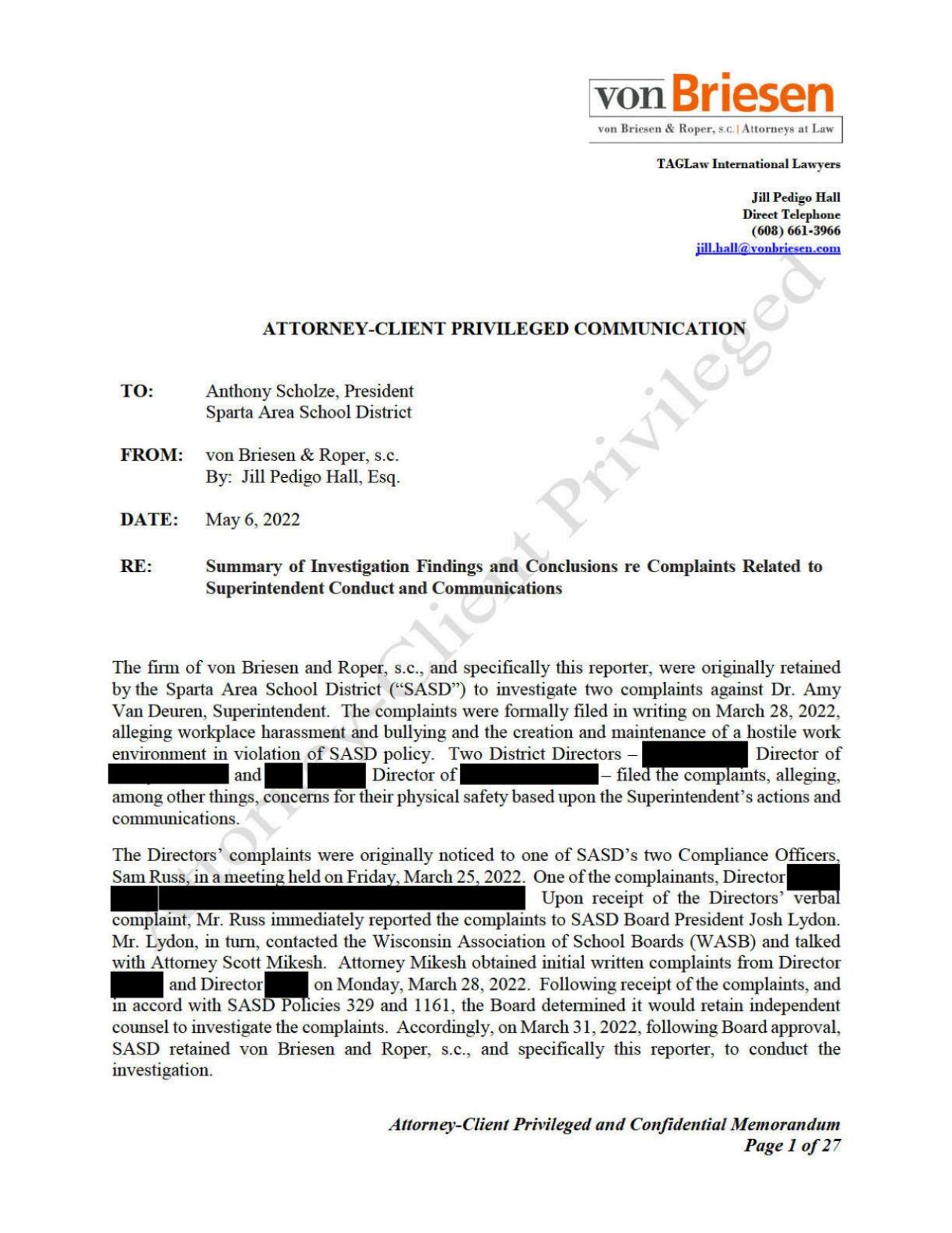