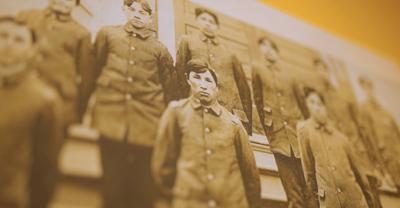 A look into Wisconsin's history of assimilation era boarding schools

LAC DU FLAMBEAU (WQOW) - In May and June 2021 Canada was making international headlines after remains were found of more than 1,500 Indigenous children in unmarked graves from seven boarding and residential schools for indigenous children. This prompted U.S. Secretary of Interior, Deb Haaland to launch an investigation into the United State's same type of schools that were operational in 1819 until the 1960s.

According to state historical records these schools were meant to convert Indigenous children into Christians or to replace traditional Native American languages and cultures with English and mainstream white culture.

Many of these schools in Wisconsin have been torn down and the land where they stood is now privately owned making it more difficult to find if Wisconsin would have similar burial sites like what was found in Canada.

But one structure from this painful part of history is still standing in the Northwoods of Wisconsin.

"It's a really traumatic history for the Native Americans but it's also a story that needs to be told," Sarah Schuman told News 18. Schuman is the Tribal Historic Preservation Officer for the Lac du Flambeau tribe. She has heard first-hand from family and tribal members about what happened inside those walls.

"When they first came here they had to get their hair cut, their braids were taken, they were told to wear dresses, shoes, hats, if they spoke their language they were punished. As for the punishment we aren't sure what that was."

These schools were operational during a time that is referred to as the assimilation era. Families were forced to send their children to these schools and leave behind their families, culture and identity.

"It was just to get them accustomed to the white culture."

The Lac du Flambeau Boarding School was operational from 1895 until 1932. During that time hundreds of Native American children were taken from their families to be taught under the U.S. Federal Government.

According to records the majority of the children that were there were from the Potawatomi, Ho Chunk and Menomoniee tribes. There were a few Lac du Flambeau children that there were because their villages were just across the lake from the boarding school complex but that changed quickly.

"Some children would escape," said Schuman, "and then the people would have to go back and kind of wrangle the children. So eventually what they started doing was sending the Lac du Flambeau children off reservation to other boarding schools so it would be harder for them to return to their families."

Each year at the school they housed more than 150 students and multiple staff members each year. It stated it was a school for children ages 5-8 but tribal accounts and photos lead many to believe it even started younger.

"Some of the children look smaller than the age of 5. What was happening was a lot of communities would say that their child was only 3 or 4 and they ended up taking a yard stick and if the child was as tall as the yard stick or taller, they would just take the children regardless if they were actually 3 or 4 years old."

The building that still stands was witness to a painful part of tribal history, but is now seeing a beautiful future for the tribe and it's people.

"It's kind of like we are putting our foot down. No more taking of our culture," said Schuman. "We are just trying to preserve that as future generations go on."

The building and the grounds are now being used for classes to teach tribal members their language, arts and a place to celebrate their culture."

"Teaching our children our culture, rather than just one side of the culture that they only know in the history books."

According to the Lac du Flambeau tribe as of right now their boarding school is not being investigated by the U.S. Department of Interior. We asked them if they know of any burial sites in the area. According to Schuman since the area surrounding it has been developed over the last couple of decades it is hard for them to pinpoint if there are -- or were -- any burial sites surrounding the school.

In 1891, the U.S. government designated Tomah as the site for a new Native American school.

The location is the current location of the Tomah VA facilities.

The purpose of the school was to provide an education to Native Americans to assimilate into American culture.

The school opened in January 1893 with seven employees and seven students. It eventually grew to nearly 400 students. Most were from the Ho-Chunk Nation.

Students were taught mathematics, reading, music, athletics, and how to practice Christianity.

Email us your story ideas to news@wqow.com

Walz calls for vaccine and testing requirements for teachers